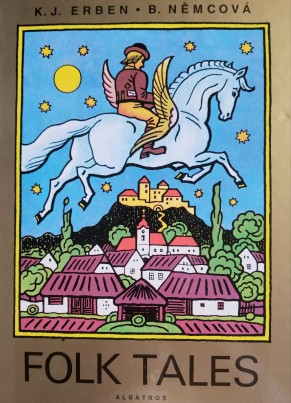 The most beautiful Czech classic fairy tales, such as “Princess Goldie”, “Cook, Mug, Cook!”, “Mr. Long, Mr. Broad and Mr. Sharpeye”, “The Gingerbread House” or “The Seven Ravens” compiled by K.J. Erben and
Božena Němcová and illustrated by Josef Lada.

Karel Jaromír Erben (1811 – 1870) was a Czech folklorist and poet of the mid-19th century, best known for his collection Kytice, which contains poems based on traditional and folkloric themes.

Božena Němcová (1820 – 1862) was a Czech writer of the final phase of the Czech National Revival movement. Her image features on the 500 CZK denomination of the banknotes of the Czech koruna

Josef Lada (1887 – 1957) was a Czech painter, illustrator and writer. He is best known as the illustrator of Jaroslav Hašek’s World War I novel The Good Soldier Švejk, having won the Deutscher Jugendliteraturpreis in 1963. The asteroid 17625 Josef Lada has been named after him.